HOW DOES THE FRAME FIT YOU?

Most folding bikes can accommodate a large number of physiques because of the telescoping seatpost and handlepost; many advertise fitment of riders from 4’9” to 6’1” (144.5 to 185.5 cm). With road bikes, by comparison, bike fit is a lot more critical – so much so that an entire bike-fitting industry has popped up in recent years just to address the physical and kinematic relationship between rider and bike. 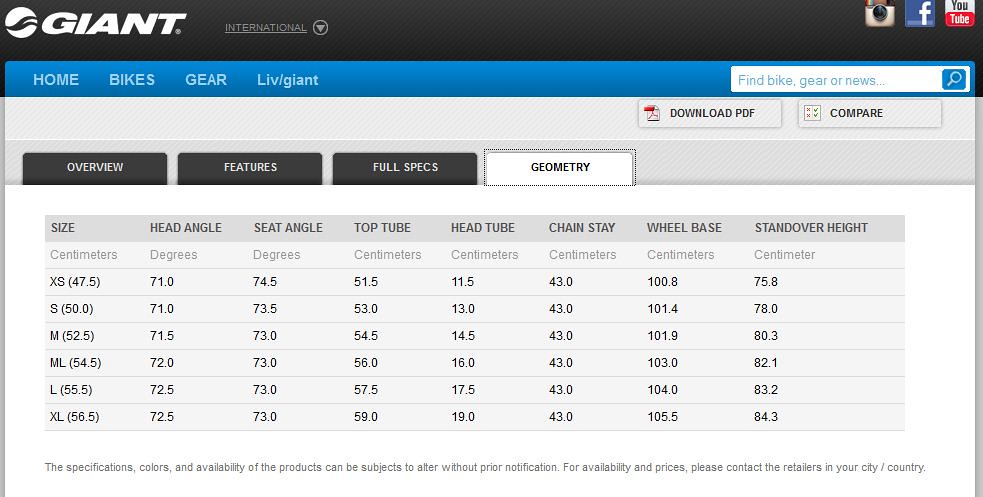 The geometry chart for Giant’s TCX from 2014. This is a pretty basic example; other manufacturers go into more detail with things such as head tube angle and bottom bracket drop.

It all begins with getting the right size bike for you. Most bikes bought off the shelf come in a range of sizes. These typically differ in their seat tube length (abbreviated ST) and top tube length (TT). For frames with non-horizontal or sloping top tubes, it’s the effective top tube length (ETT) you’re interested in. All of this is written on a bike’s geometry chart, with values per size of bike.

For newbies to road bikes, it’s best to swing your leg over the actual bike and check the fit yourself. With more experience, you can start looking into the reach and stack figures for the bike – the vertical and horizontal measurements relating to the bottom bracket and handlebars. Since reach and stack are measured from the same locations across all bikes, this provides an instant basis for comparison between them.

Related to bike fit is the head tube length (HT), which determines your riding position on the bike.

Long head tubes put you in a more upright position, and don’t require as much of your lower back. For this reason, they are a fixture on endurance bikes which are meant to be ridden for hours on end, and such bikes are better for those of us without sufficient flexibility.

By comparison, short head tubes give you a long and low position best for racing. This benefits aerodynamics, as reducing your frontal area decreases aerodynamic drag, making you more efficient while pedaling at sustained high speeds. The drawback is that you have to be able to sustain such a low position, not something everyone can do in comfort.

HOW WIDE OF A TIRE CAN YOU SMOOSH INTO THE FRAME? 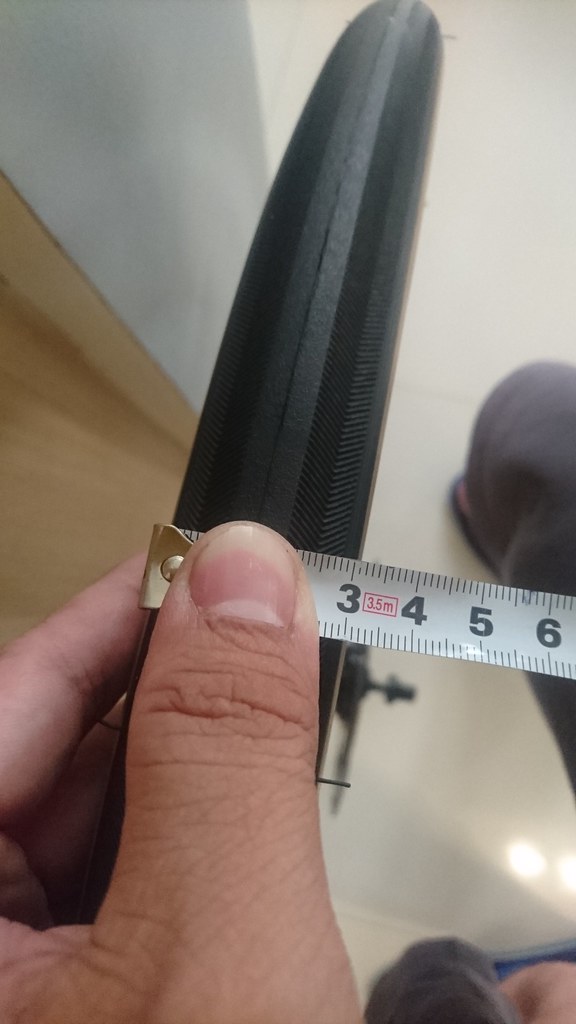 Hyro can fit 32 mm tires with lots of room to spare – par for the course for a cyclocross bike.

These days, sticking wide tires into a road bike to improve comfort is no longer a badge of shame. The professional cycling peloton has done away with 23 mm tires and adopted 25 mm rubber for most races, with even wider options being used for particularly bumpy races such as Strade Bianche or Paris-Roubaix. If a modern road bike frame can’t fit at least 25 mm rubber, I suggest you look elsewhere.

This is where cyclocross bikes and gravel bikes have a distinct advantage. As per UCI competition rules, cyclocross bikes should run a 700C x 33 mm knobby tire, and most cross machines will come with even wider 35 mm rubber as stock. Gravel bikes have even less restriction, generally fitting at least a 40 mm tire with clearance to spare. Notable on both bikes is that they often run disc brakes, which removes restrictions on tire width. 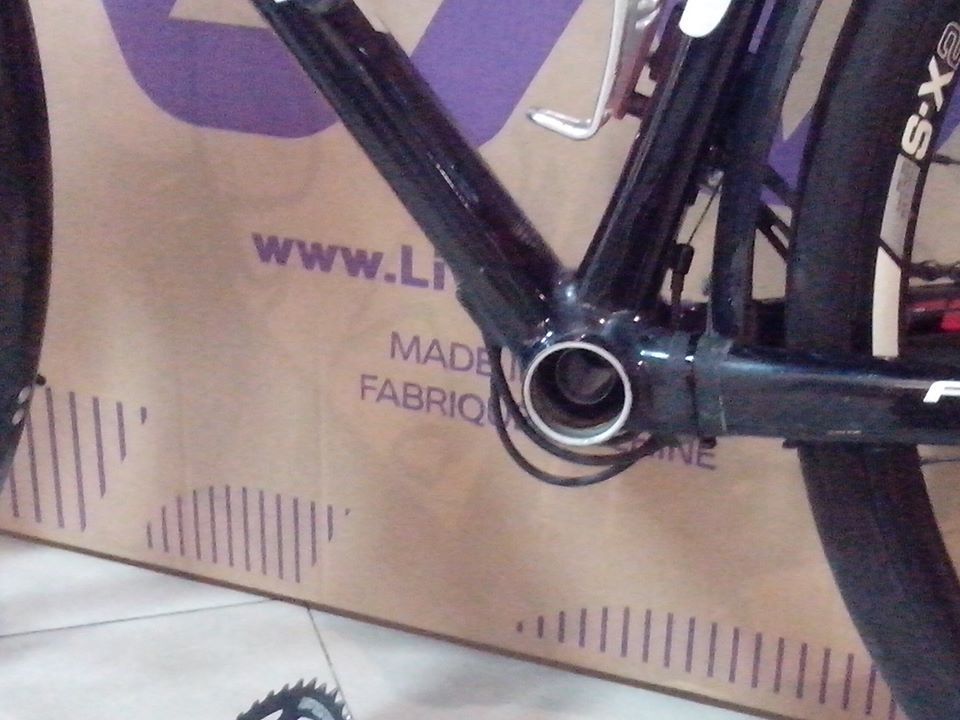 Bottom brackets and their many, many formats are a potential minefield that I tackled in a previous post. Each has its positives and negatives. So far, though, the good old 68 mm BSA threaded bottom bracket shell is the resurgent choice, after a decade of complaints on the various press-fit formats, and for good reason: it just works. 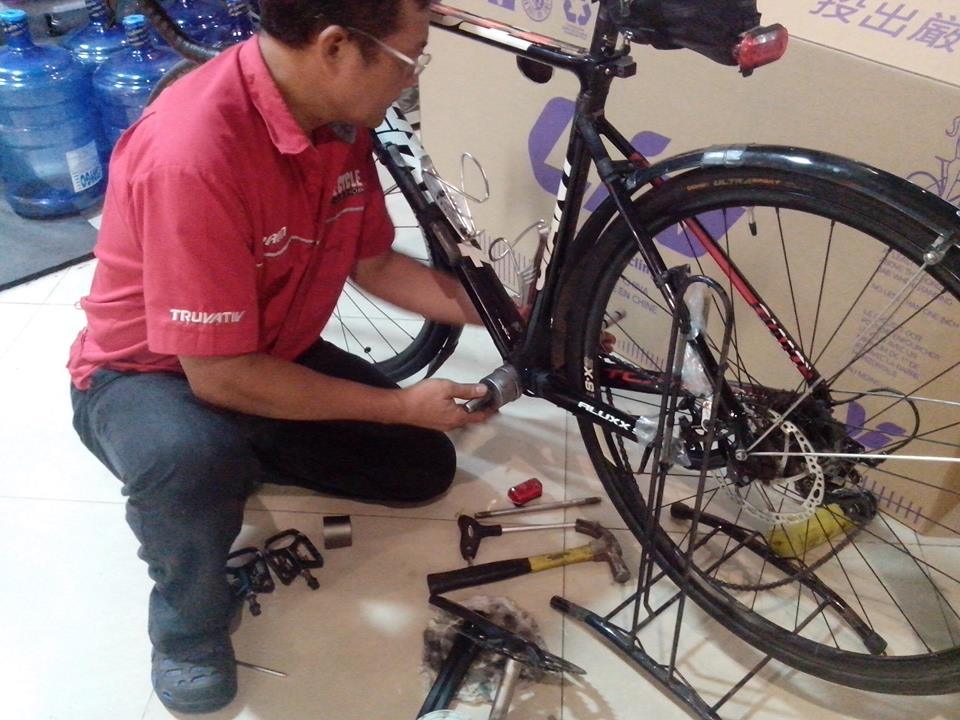 Mang Boy of LifeCycle setting up the bearing press for Hyro’s bottom bracket.

That’s not to say that frames made with the press-fit bottom bracket standards are all bad. My TCX has a BB86 bottom bracket shell, and so far I have had a decent enough experience with it, paired with FSA and Shimano cranksets. Anecdotally it’s the BB30 and PF30 formats that seem most problematic.

The frame determines the kind of headset it uses. There are bikes that use pressed-in headset cups, while others have the cups integrated into the head tube. 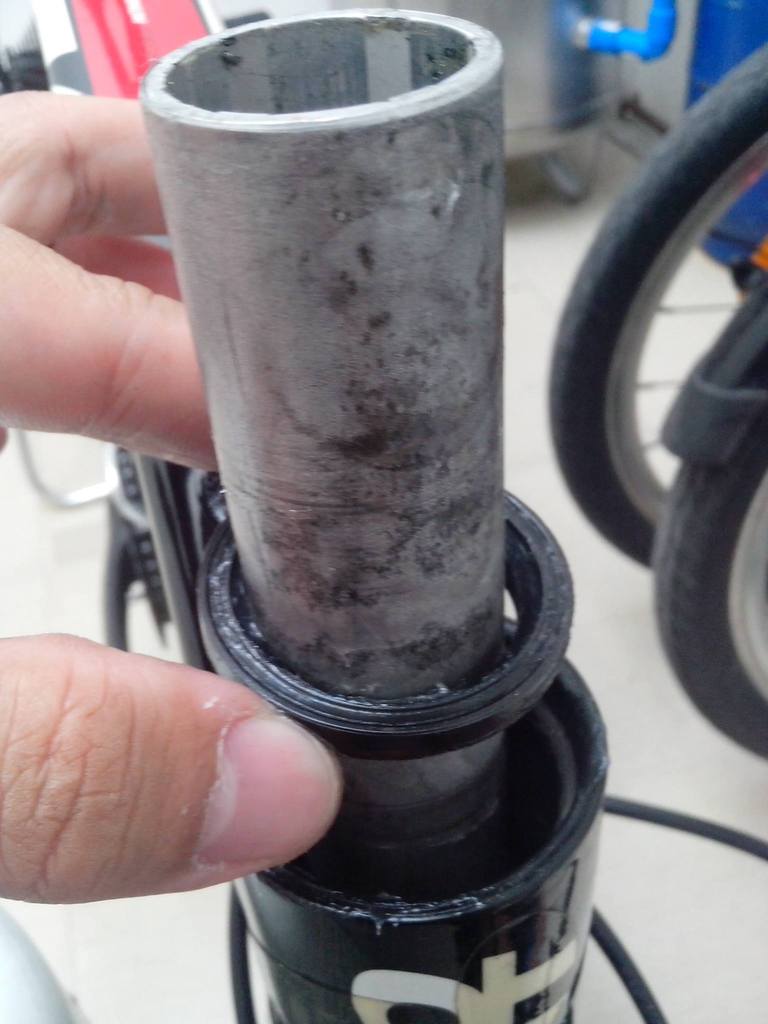 The TCX has integrated headset cups machined into the head tube. Its 1-1/8″ and 1-1/4″ bearings support a fork with a tapered steerer tube.

This also influences the size of the headset bearings themselves. The most common combination of headset bearings I’ve seen in recent years is a 1-1/8” (1.125”) top bearing and a 1-1/4” (1.25”) bottom bearing – a headset to accommodate a fork with a so-called “tapered” steerer tube. Giant’s higher-tier bikes have the “OverDrive2” headset system, which makes use of a 1-1/4” (1.25”) top bearing and a 1-1/2” (1.5”) bottom bearing. This is supposedly to increase front-end stiffness and steering precision, but it also means headset bearings can be a little tougher to find once you need a replacement.

The decision between rim brakes or disc brakes is a major influence on the frame choice, as very few road bikes can support both (Orbea’s 2014 Avant series being a rare example). Disc brakes put more stress onto the non-drive side of the frame, so these areas have to be beefed up accordingly. Bodging a disc brake conversion on a rim brake bike can end in a bent fork or rear triangle, so you will usually have to choose between one or the other.

One argument for disc brakes is that they will support wider tires by default, as there is no longer a brake caliper straddling the width of the wheel and restricting it. Caliper rim brake bikes tend to max out at 28 mm or 30 mm rubber; cantilevers or mini V-brakes accommodating around 35 mm. 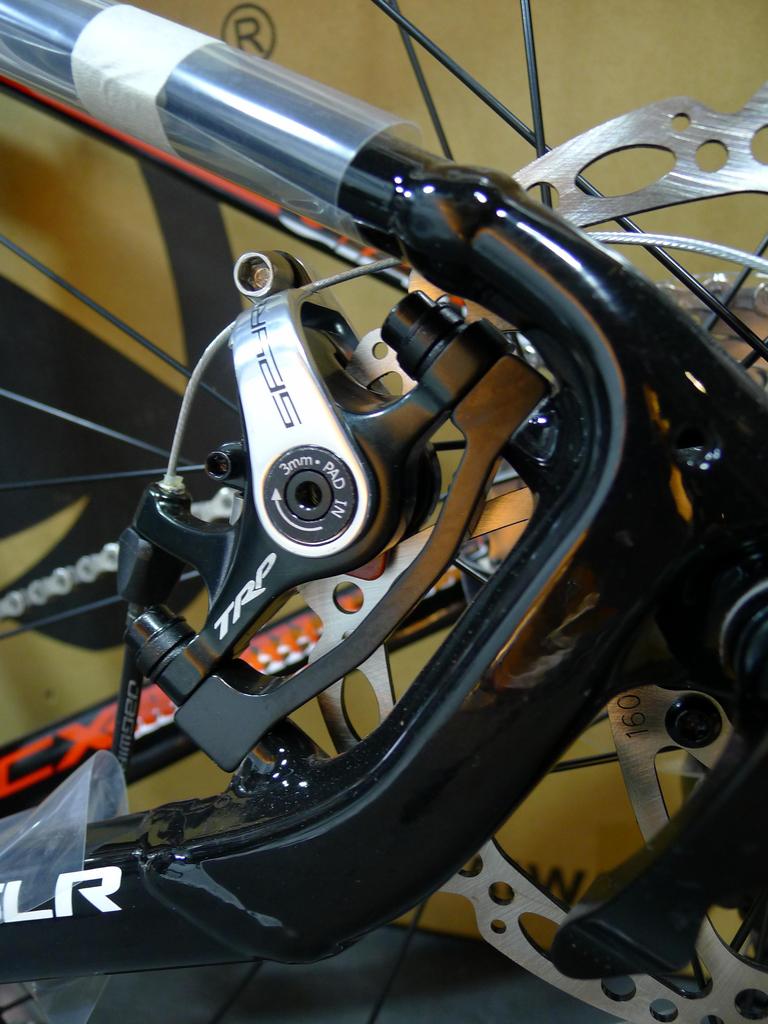 Hyro, my TCX, uses Post-Mount hardpoints for his brake calipers. This can still be found on some cyclocross bikes. 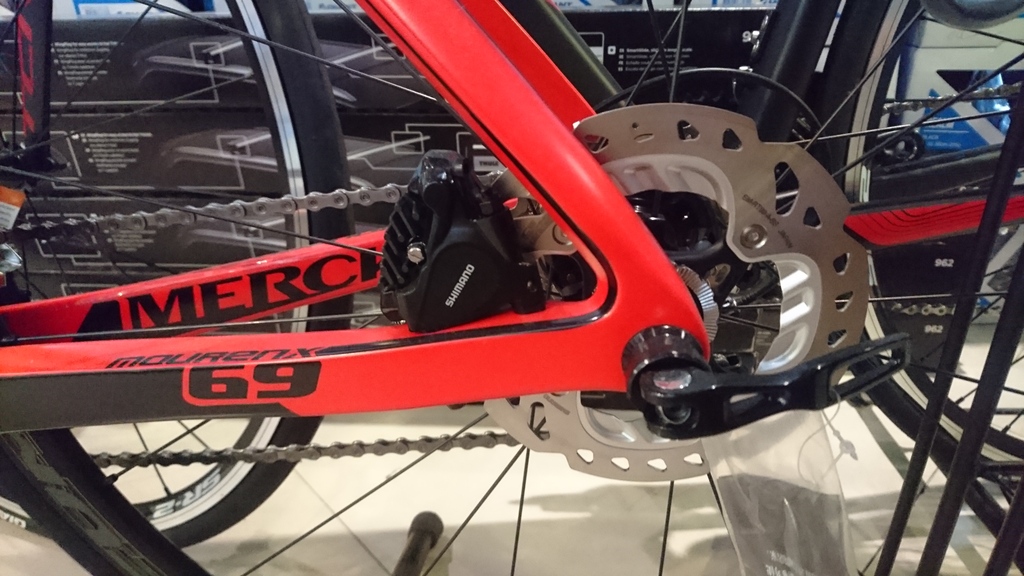 This Eddy Merckx Mourenx69 road bike uses Flat Mount hardpoints, where the mounting bolts go all the way through the chainstay. These days, this is the norm for disc-braked road bikes.

A final concern for disc-brake bikes is the caliper mounting system. Early disc-braked road bikes from 2014 cribbed the Post Mount system from mountain bikes, but Shimano has since successfully pushed for the adoption of Flat Mount – which is what you will see on modern bikes.

WHAT OTHER FEATURES DOES THE FRAME SUPPORT?

We’re delving into the realm of “nice to have” features here, but they can be a deal-breaker depending on the kind of riding a cyclist has in mind. 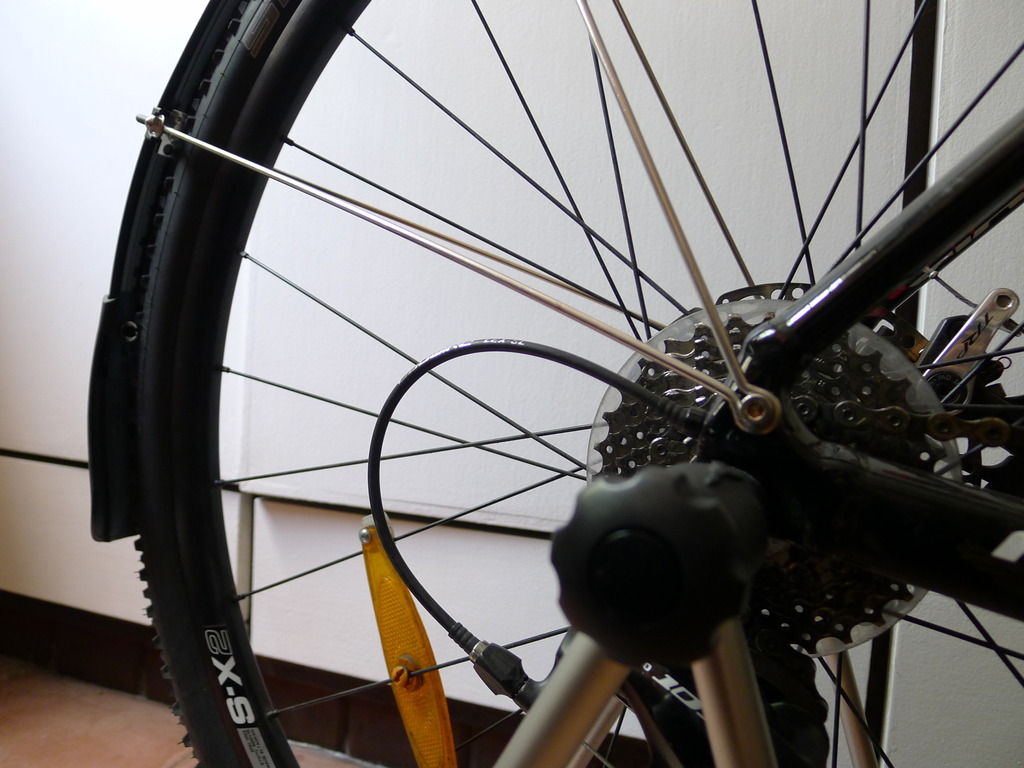 Personally, any road bike with no fender eyelets and rack mounting points is a no-go – automatically disqualifying a lot of options at the time I was shopping around for one. While Giant bestowed threaded eyelets on my TCX’s dropouts and fork, it was still missing mounting points at the seatstay bridge and chainstay bridge, so I had to bodge those up. 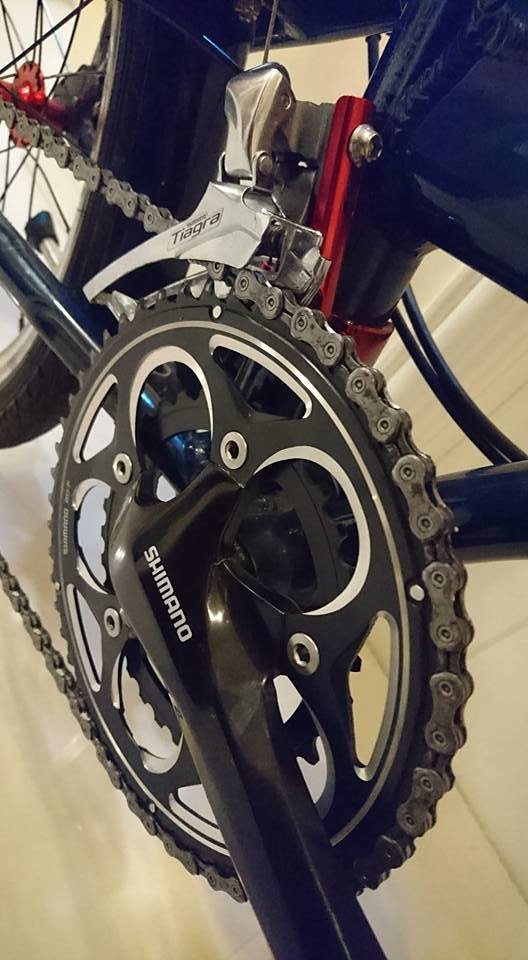 Front derailleurs with braze-on mounting are prevalent almost due to preference, but not all road bike frames can mount them straight away as they don’t have the riveted or brazed-on mounting tab on the seat tube. Typically these bikes have round seat tubes, so making use of either an appropriate front derailleur adapter or a band-on front derailleur should solve this issue.

DID YOU NOTICE ANYTHING?

You may have noticed that I did not once touch on the groupset, wheels, tires, or personal-fit items like saddles, stems, and handlebars. While these are major considerations, they’re also easily replaced in case something problematic happens – almost all of them are wear items anyway. By contrast, the frame is the heart of the bicycle; if you replace the frame, you might as well have bought an entirely new bike.

I also spy a lot of questions being asked on forums and Facebook groups about frame sizing, bike fitting, headsets, or bottom brackets, when these are all highly frame-specific items and have to be taken into consideration when actually buying a bike in the first place. I find it’s much better to buy a bike knowing full well what its frame’s quirks are so that you fully understand what you’re getting into – especially if you intend to perform your own maintenance.

This site uses Akismet to reduce spam. Learn how your comment data is processed.